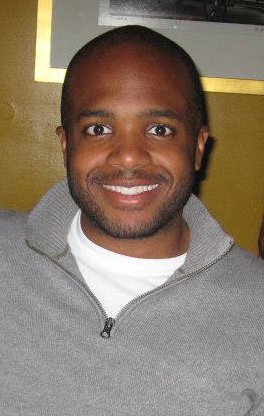 A recent photo of myself
Born back in Lansing Michigan, Ben is the son of a math professor and an accountant. He currently lives in Smyrna GA where he works as a web developer for Encompass Digital Media.

The nic-name Streamline? Ah, well that all started back in the summer of 2000. Ben attended a program called "Challenge", it was aimed at preparing minority students for the hardships of the life at Georgia Tech. During the "getting to know you" session, another student revealed that he was a diver in High School. Happy to see another person of aquatics, Ben let it be know he too was a swimmer. Cedric, the man in charge of the program exclaimed "You were a swimmer? I don't want to sound mean but you aint the most boyant [person] in the room." Amid the laughter following his statement, Ian, a councelor behind him said "Yeah, he's not too streamline."

Somehow that stuck, and everyone called me streamline for the rest of the summer. Now theres a little trick I learned from years of getting bullied. If a bully is calling you a name, you pretend to like that name and that bully, seeing that there is no fun in calling you soemthing you like, will stop. This theory does not work as an adult! My acceptence of this monacre seem to just give creedence to everyone calling me "streamline", eventually I to learned to actually like this nic name.

By the time freshman year actually started, I was introducing myself as streamline to people. The name Ben was only soemthing I filled out on official forms. Years later I even named by company "Streamline Digital Solutions" and applied the nic-name to every social networking site I used. I have recently lost a considerable amount of weight, so that I may now live up to my long-term sudonym.

So what kinds of stuff will you see here? I am going to use this site as a cumulation of everything I do on other social networking sites. I will not only be posting videos I take, but link to some of my other favorite youtube videos I like. I will also be posting photos I take every now an then, Im no professional photographer so most of the pictures will be of cell phone quality. Mostly I will be blogging. This is a blog I should have started when i started loosing weight but didnt, so there will be some stuff about my weight loss, but mostly about my ideals and thoughts about life. What you will NOT see is a chronological breakdown of what I did everyday. Thats lame and boring, you want that breakdown, then chat with me. I life my life as a nerdy ex-fat black man, and will blog on my experiences as such.